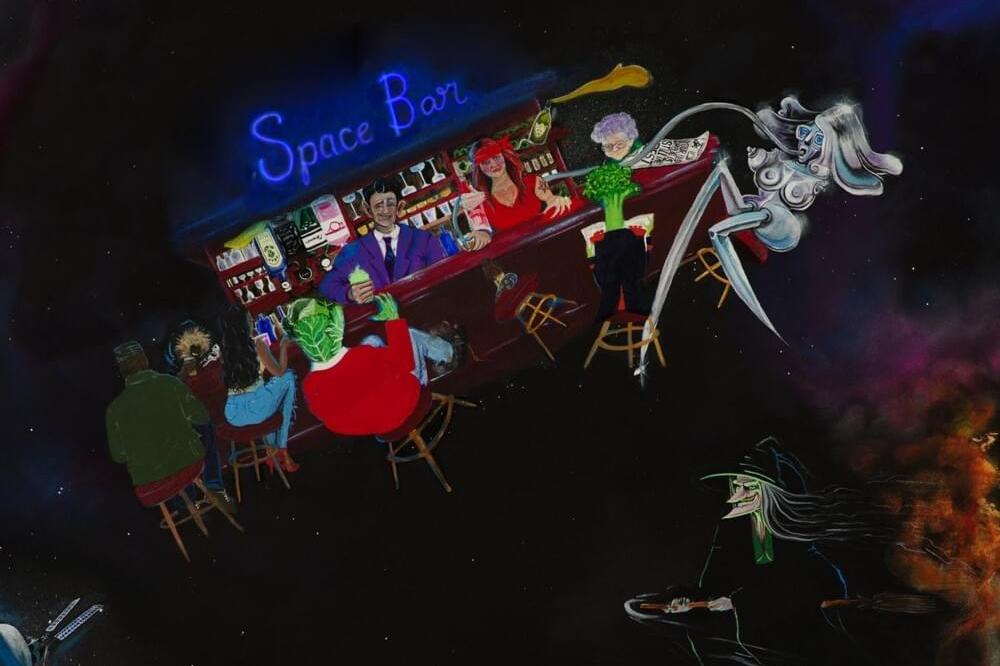 Releasing his fourth project this year, Your Old Droog’s immaculate rapping and incredible work ethic continue to prove he is one of the most ambitious figures in modern-day hip-hop.

Your Old Droog continues his creative journey, releasing another impeccable project, titled Space Bar. Being the imaginative artist that he is, Droog lays out the foundation to build another tight concept laced around hard-edged rhymes and amazing production that exhibits his grand musicality. Though the project has a concept that consistently sticks with each track, the project’s motive seems to display intense lyrical exercise, bringing a lost energy back to the genre.

Space Bar is an amazingly consistent experience, providing a platform for Droog to bar out while building a concept larger than life.

Never being one to drag out his albums, Droog’s Space Bar provides a equitable time span of 32 minutes for listeners to indulge in the album’s content. Space Bar remains compact with its concept, stretching the theme over thirteen tracks named after popular alcoholic drinks and space-related ideas. The album opens and closes with the same spacey instrumental, keeping listeners engaged with Droog’s intergalactic abstraction from beginning to end.

As mentioned, the core intention that drives Droog to release a project of this caliber is the untamed nature of barring out over dope instrumentals. Being that Space Bar was compiled of songs dating back to 2014, this album contains the different styles that Droog has embraced over his career. The common denominator derived from each track selected was the ambitious hunger delivered with each bar. Droog keeps the punchlines effortlessly flowing with hilarious one-liners and witty references in each of his verses. This is prevalent in tracks “Cosmonaut” & “White Russian” where he lays some hysterically witty lines like, “Never turn down a fade like Boosie / but fuck that, diamond on my mind like Uzi”.

Space Bar features a diverse & consistent sonic palette with Droog rapping over production from Nicholas Crave, 88 Keys, SadhuGold and many more. As stated, Space Bar contains tracks recorded as far back as 2014, which signifies Droog had to put in more work in sequencing the album’s tracklist. The end result was a cohesive spacey sound for the production, helping build the project’s intergalactic theme. Records like “2001: A Space Yodyssey” and “Bloody Mary” add a dramatic tone to the narrative while “Blue Hawaiian” and “Dom Perignon” conclude the album with their laid-back aura. The production for Space Bar fulfills its role of creating a fitting atmosphere and remaining consistent from beginning to end.

While Space Bar exhibits the ferocious lyrical exercise from the New York emcee, it also contains some of Droog’s best conceptual work. In accord with the track titles is a connection to an experience from Droog’s life that he shares within a verse. The serious “Bloody Mary” tells the tale of his female friend who fell into the dangers of the New York gang scene while “White Russian” describes his misperception of being labeled a “white rapper”. These aspects help the album thrive as we see Droog entering different pockets rather than remaining linear.

From a listener’s standpoint, Space Bar achieves a thrilling feeling that most albums lack in today’s hip-hop landscape. With the amazing content we’ve seen being delivered over the past two years, not many albums provide the stimulating feeling of hearing tight rhyme schemes over progressive hip-hop instrumentals, but still staying rooted in the genre. Your Old Droog’s Space Bar provides all these aspects laced into an absorbing concept that leaves listeners begging for more. An extension of this intergalactic foundation could suffice for another thematic project, which proves how fascinating Droog’s musical concepts are.

With that being said, hip-hop fans everywhere are missing out if they’ve yet to tap in to Your Old Droog’s latest project. Many artists have toyed with the space-related notion in music, but Droog takes it to higher level on Space Bar with his captivating flows and menacingly hilarious punchlines. Your Old Droog continues to take over the year with his fourth release holding up in great musical quality and riveting conceptual structure.