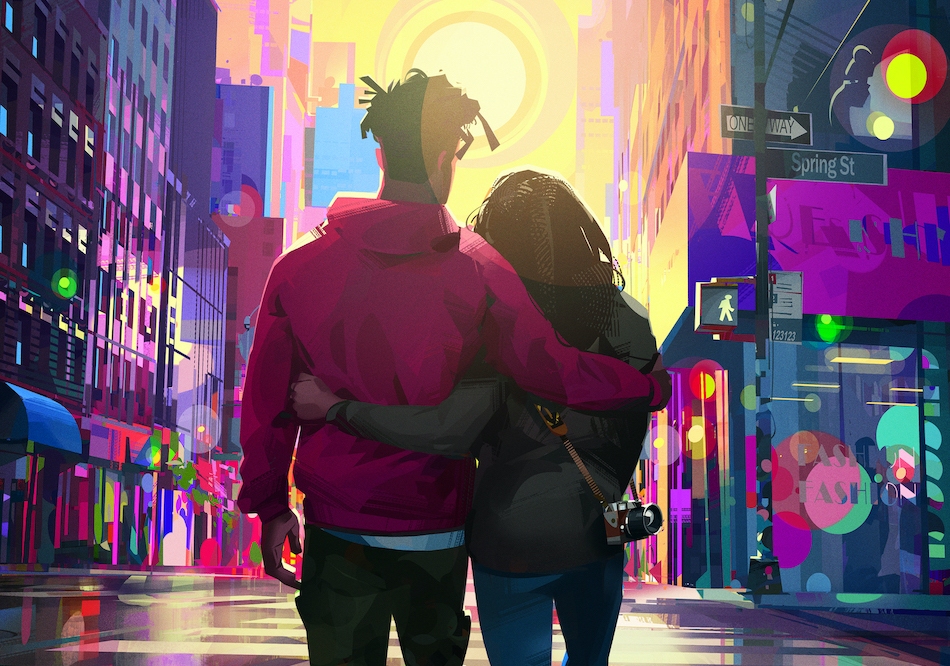 The accompanying half to Mescudi’s Netflix animation circles around in mellow, moody and minimal ambience, conveying the feeling of love but carrying an empty heart.

Scott Mescudi’s always been an entertainer. Ventures outside of music have been in place for years, from acting in feature films and television shows to executive producing his own visions. In 2020, he launched his production company, Mad Solar, a banner which has lend a hand in films such as X and Cudi’s Amazon documentary, A Man Named Scott. Its biggest project so far is Entergalactic, a dual animation-soundtrack announced back in 2019. The work was delayed in favour of Cudi’s much-anticipated album Man on the Moon III: The Chosen, but it has now arrived in tandem of each other.

Entergalactic is warm and charming, much in line with the love story in the matching animation. But as a standalone album, there is little weight to hold up its shelf life.

Mescudi has vehemently stated that Entergalactic is his tenth studio album (incl. WZRD and KIDS SEE GHOSTS), not a mere soundtrack to his Netflix animated show of the same name. But Entergalactic is in fact a soundtrack album, carrying the sound and skeleton expected from a record designed with tie-ins in mind. It means Cudi is not putting his best foot forward, offering half-baked ideas that lower your expectations. Tracks like “Angel” are essentially interludes despite not being billed as one, vapid in weight required for an engaging song. These points of anticipation churn from track to track, where the listener’s waiting for the kicker that’ll cement its authority on your senses.

On the melodies, Cudi is stuck in one note. Known for being one of the best melody-makers in hip hop period, his talent is rarely on show here, rehashing melodies we’ve already heard earlier in the tracklist or ones from his previous album. The second-best song on the album, “Maybe So”, sounds like a demo of MOTM3’s “Sept 16”, kept alive by its smart choice of strings and warmth in Cudi’s vocals. It also houses the rapper’s simple approach to songwriting, which works in cases like this and “Willing to Trust”, though is a crux to the majority of the album. Verses sound like freestyles, and hooks centred around love embody the usual clichés (“I need your body, let me have you, please”). With such a light sound in place, some weight to the writing would create the compensation needed.

What Entergalactic does have going for it is the pleasant tone. The word ‘psychedelic’ gets thrown around a lot for Cudi’s music, but Entergalactic is truly psychedelic. Its main focus is the feeling of love, so it ensures a spacey, mellow sound all throughout the runtime. The production is nimble in songs like “New Mode” and “My Drug”, tender enough to slot right into scenes from the film. Here lies what makes Entergalactic so inoffensive. It carries a smile the whole way, radiating that lovesick energy that keeps the music away from the pits and more in the lounge. There is even a precise callback to Cudi’s A Kid Named Cudi mixtape; “Livin’ My Truth” could’ve fit right in place on the 2008 debut, a welcoming addition that’ll satisfy day-one fans.

Listeners outside of Cudi’s cult fanbase will continue their wait for appeasement, as the same habits show up on Entergalactic. It is the undeveloped writing, eccentric wails (“She’s Lookin’ for Me”) and tame rap beats that remain an issue (“Do What I Want”, “Can’t Believe It”). Behind the creases lies the definition of mood music, a zone that Cudi’s captured and conquered for over a decade. Though his recent admission of ‘feeling done’ with albums speaks volumes. There is only so many times an artist can execute a particular sound, or even experiment with new ones and feel the stab of the backlash. In Entergalactic‘s case, it’s more of the same that shows Cudi’s ambitions strolling elsewhere.