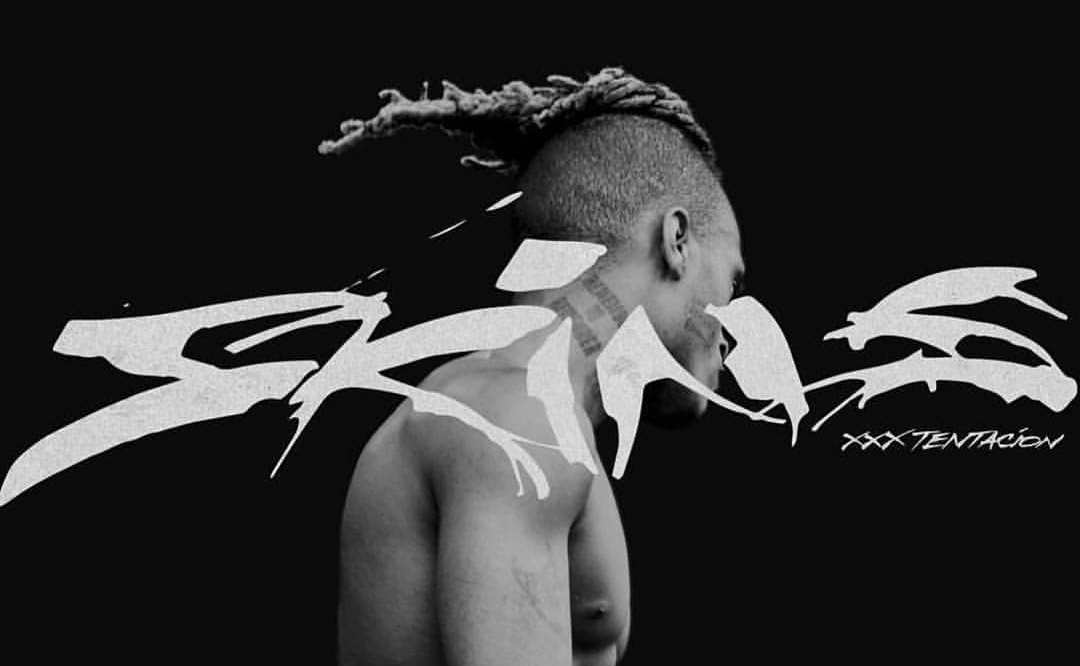 Despite a total media blacklist, XXXTentacion was one of the biggest artists of 2018. Clocking in 40 million monthly Spotify listeners, the rapper’s sudden death only continued to ascend his profile, becoming the first artist to achieve a posthumous number 1 single on the Billboard 100 since The Notorious B.I.G. It only made sense to maintain the momentum with another album; the rapper’s second of 2018.

It is public knowledge that XXXTentacion was working on an album titled Skins, however the clarify of a completed artistic vision is nowhere to be found. For 9 songs and a mere eighteen minutes, X is in a different pocket with every track that passes.

On Skins, X (or his producers) recycle ideas already executed bigger and better on previous albums. The album yields another unnecessary introduction track, which is merely the beginning of the album’s multiple rehashes. Notably, Skins bounces off the success of X’s best songs with the songs “Bad!” (a sequel to “Sad!”) and “Guardian Angel”, the latter of which reverses the instrumental to “Jocelyn Flores”. As a standalone track, “Guardian Angel” is pleasant and produces an impressive rap verse. Though when compared to “Jocelyn Flores”, the song is a lazy attempt at recreating a magic trick the crowd have already seen.

Other songs such as “I Don’t Let Go” play off the goofy flows executed on ?‘s “Going Down!”, and the closing track “What Are You So Afraid Of” hinges on another acoustic ballad to refurbish emotion seen on countless occasions (“Revenge”, “Depression & Obsession”, “Alone, Pt. 3”, “The Remedy for a Broken Heart”, “Before I Close My Eyes”). Granted, these songs are replayable; they bear ideas and sounds listeners are already fans of. However, they lose any sense of identity when these conscious comparisons are made with X’s existing catalogue.

These ideas are both recycled and unfinished. The glittery “Whoa (Mind in Awe”) is lyrically skeletal yet vocally enticing, and would slot comfortably into X’s Question Mark album. Carried purely by the tropical production, the song evidently stretches out a vocal snippet to facilitate a 2-and-a-half minute song. Elsewhere, lead single “Bad!” leans on a weak hook for a minute and a half. With a verse or two positioned in the voids these songs could have reached their full potential.

The best moments of Skins emerge on the chilling “Train Food”. Reminiscent of the fan favourite “I Spoke to the Devil in Miami”, the song tells a story of X meeting with Death, featuring lyrical substance that captures X’s apprehensions better than a sung hook can (“And there he was, his presence was alarming / As he approached, was casual, we talk ’bout self-harming”). “Train Food” ends on a jaw-dropping note with the closing line “Now it’s here, Death has now arrived, time’s finally up”. It is unsettling and emotionally poignant – characteristics that the majority of Skins fail to capture.

“One Minute” featuring Kanye West is a rage-fest, despite West’s insignificant verse running for too long (another attempt at padding out empty space). XXXTentacion’s final third is the peak of the track, bellowing his signature temperament like a true metal vocalist. If his vocals were completed, “One Minute” may have resulted in X’s best rock song to date.

It takes no genius to figure out that Skins is unfinished. Its brevity is no surprise, as XXXTentacion is the pioneer of one-minute songs, so the incompleteness does not lie in the album’s length. It lies in the songs themselves, that are not up to par with XXXTentacion’s typical standards executed on 17 and ?. This is bound to be the outcome when ideas are reused; songs will never live up to the prowess of their predecessors.

Posthumous releases are rarely flawless. It is no surprise the spasmodic nature of Skins does itself no favours. Imperfect gems are weighed by recycled ideas, unfinished songs and a total lack of vision. If XXXTentacion’s estate wish to preserve his musical legacy, they must do a better job than this.