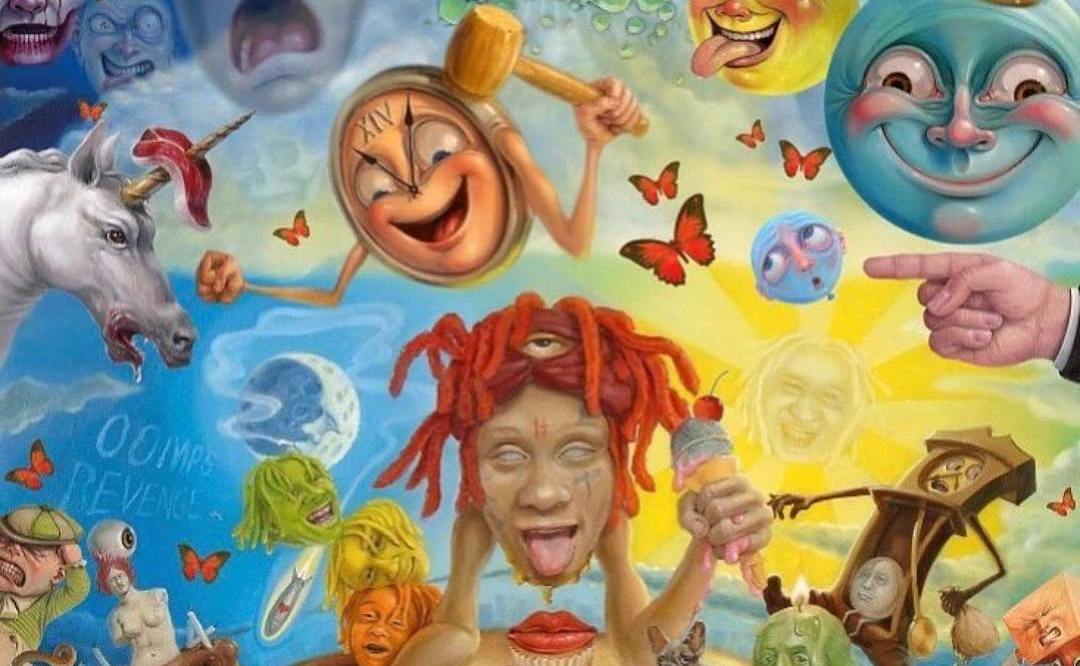 Trippie Redd touches many bases but isn’t able to string together a home run.

One of the many products hailing from the SoundCloud era, Trippie Redd emerged as the true rockstar out of his contemporaries. His wailing vocals accurately mimicked the singing of rock musicians, except it was over a trap beat. The breakthrough A Love Letter to You series found Trippie in his appropriate pocket, often called ’emo rap’, finding a quirky medium for melody and emotion. His debut album has followed no structured rollout, though fans know what to expect.

There are plenty of highlights, however Life’s a Trip lacks the ventilated backdrop of moody production that packed a punch in his A Love Letter to You series. Stylistically, Life’s a Trip is all over the place. From conventional rapping (“Missing My Idols”, “Oomps Revenge”) to sombre emo crooning (“Together”), Trippie Redd explores as much as possible over 14 tracks. As a result, Life’s a Trip sounds more like a compilation mixtape than a studio album.

Life’s a Trip is at its best when Trippie focuses on sadboy ballads. The opener “Together” brings the indulgent sentiment of heartbreak over the mellow guitar strums. “Underwater FlyZone” is the most powerful moment of the album, picking off where “Together” left off to channel Trippie’s emotion into a worthy closer. Tracks like these are reminders that Trippie Redd can blissfully wear his heart on his sleeve in a genre that some say lacks substance.

The achilles heel of Life’s a Trip is songs coming across as SoundCloud loosies rather than album-worthy compositions. While not intolerable, the beats on Life’s a Trip lack the typical animation of A Love Letter to You. The best of the collection are “BANG!” and “Shake It Up”, providing quirky melodies that justify their placements. Despite being the shortest song, “Shake It Up” thrives off its amusing arrangement, providing a necessary lift to the spirits of the album. Other songs such as “Taking a Walk” and “UKA UKA” are right up the SoundCloud alley, granting enjoyable listens but fall short of Trippie Redd’s capabilities to compose songs that feel complete. The exclusion of “TR666” featuring Swae Lee is also disappointing, which would have easily been the best song on the album.

The most complete song on Life’s a Trip is the lead single, “Dark Knight Dummo”. Its haunting organ melody sees Trippie enter fresh territory, packing a vital 4-minute burst of energy on an otherwise lifeless album. Accompanied by the fitting appearance of Travis Scott, “Dark Knight Dummo” sets itself apart as one of the few songs that touches the expected calibre of album material, an embodiment of a polished song with pristine production, a memorable hook and confidence in its replay value. If Life’s a Trip followed this blueprint, its satisfactory tracks (“Gore”, “UKA UKA”) could have reached their full potential.

Luckily, there are moments where Trippie Redd displays versatility. Just like on his debut mixtape, Trippie ensures he flexes his ability to rap on the song “Oomps Revenge”, standing out thanks to its 90s-styled production and memorable one-liners (“Jimmy Neutron, I told that bitch to ‘have a blast’, ho”). It is a welcoming change of pace from the album’s tedious production, but opts to serve as a mere 2-minute freestyle rather than fulfilling its potential as a full song.

For a project dubbed as a studio album, Life’s a Trip features too much mixtape-worthy material. Through the lens of a mixtape, Trippie has delivered an enjoyable collection of songs. However, as a debut album, Life’s a Trip is far too forgettable, leaving much to be desired from Trippie’s melodies and the ill-suited production. There are enjoyable songs to take from Life’s a Trip, but altogether could have tapped more into Trippie Redd’s potential.