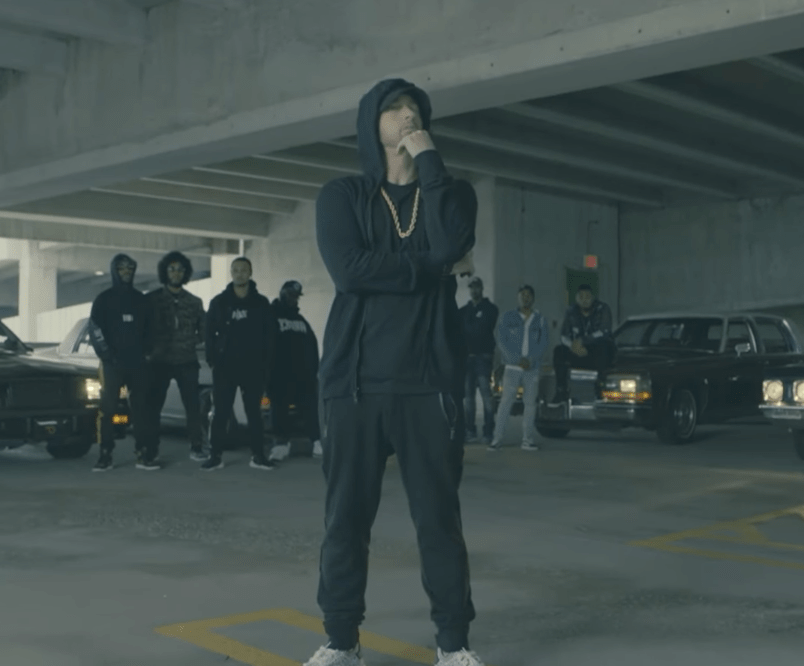 On October 10, 2017, the 2017 BET Hip Hop Awards aired to the public. As always you get the group cyphers, but the main attraction of the event was Eminem’s 4-minute solo freestyle. It wasn’t just a freestyle though, it was a content-heavy political statement addressing the current President of the United States, Donald Trump. Unsurprisingly, it caused a massive amount of controversy and discussion – not for the first time in Eminem’s career. He’s built his career off of being off-the-wall and controversial, so what’s so special about it this time?

It’s one thing to take direct jabs at pop culture figures (Britney Spears, Will Smith, Mariah Carey, to name a few). It’s another thing to mix politics and music so transparently.

People can enjoy anything with no questions when political views aren’t brought into the picture, whether that be music, movies or even friendships. Eminem’s freestyle split people and rap fans in relation to the content and who it was coming from (a white man) and the state of its delivery.

I’m here to talk about the rap side of this freestyle and to respond to the critics whom believed something like this was not necessary, or well executed.

First off, was this freestyle well-executed? It depends on if you view it correctly or not. When I first heard it the stop-and-start / lack of flow in Eminem’s delivery annoyed me because he’s repeatedly done this in recent freestyles, including the fact that it was recorded acapella. If you see it through the correct lens, Eminem’s purpose is to strip everything down to the bare message in his words so that it is heard as clearly as possible. If there’s no beat, there’s no way you can filter his words or have them go over your head. If that’s the approach then yes, the freestyle executed its purpose brilliantly.

We can’t be sure how much of this freestyle was directly made up on the spot either. The delivery makes it seem as if it is, and if it was then the delivery is absolutely justified. If it was pre-written then that brings the delivery into question in terms of an enjoyment level. However, again, this freestyle does not serve the purpose to entertain.

“Racism’s the only thing he’s fantastic for
‘Cause that’s how he gets his fuckin’ rocks off and he’s orange
Yeah, sick tan
That’s why he wants us to disband
‘Cause he cannot withstand
The fact we’re not afraid of Trump”

Now what about how lyrical Eminem was being? Many people have taken Eminem’s performance in the freestyle as proof that he is “washed up” or that he’s “too old” and can’t rap anymore. On the contrary, he wasn’t spitting any complex, multisyllabic ‘Rap God’ shit for the very same reason stated above.

You have different styles of rap and different ways of executing a certain message (or no message at all). The aim of the freestyle was to get straight to the point. If Eminem didn’t simplify the bars there would be too many interpretations going around about what he is saying, when all he is really saying is “Fuck Trump”.

There’s nothing wrong with that approach, yet it makes people question Eminem’s rapping ability. Eminem has already proven he can rap. His rhyming ability has been solidified since 1998. He doesn’t need to prove that again.

It’s most likely young millenials and new-age rap fans spewing these beliefs. Although, it’s almost hypocritical to say the freestyle is whack when the majority of modern music consumption is made up of “mumble rap”. These rap consumers simultaneously despise lyricism, yet there’s nothing rappidy-rap about the freestyle to complain about anyway.

Besides millennials, it seems that casual rap fans also want to chip in an unqualified opinion. In the age of the internet, everybody can say whatever they want to say without having to prove that they’re knowledgable on the subject in question. However, genuine rap fans who are in tune with the culture know Eminem can rap and that he is an undisputed legend in the genre. You don’t even have to be a fan of Eminem’s music to admit that he can rap. You could completely despise his catalogue and grill his approach to songwriting, but one thing that cannot be denied is Eminem can rap, even though this freestyle may not prove that to you.

If you’re a new-age fan who’s never listened to Eminem and use this freestyle as your only impression that’s a mere reflection of the spoon-fed era we are in today. This is a time where we only take what’s in front of us rather than taking the time to look into the past, where all of Eminem’s best work lies. That ‘past’ could be as far as a mere 4 years ago with 2013’s “Rap God”. All it takes is a quick search and stream.

Responses like these is a direct reflection of the musical climate we are in. Hip hop is now the dominant musical genre in the States, meaning that more and more people are tuning into the music and culture – except they’re not tuning in attentively. They’re merely spectators to something that’s much bigger than what they understand. This is what leads to unqualified statements.

Another observation people have made is that a new Eminem album is on the way in mid-November. So a controversial freestyle that’ll direct attention to you and serve as indirect promotion for your album? Seems like a good reason to do it.

The problem with that argument is Eminem doesn’t need promotion to sell well. The climate of musical consumption may be different than it was since his last album (MMLP2, 2013) but Eminem is such a huge artist that he can drop an album out the sky tomorrow and still go platinum in two weeks. His fanbase is so huge and hungry for a release that they’ll make the effort to know when it is coming. If you want to talk about streaming, then it would stream millions of times in the first few days alone as well. 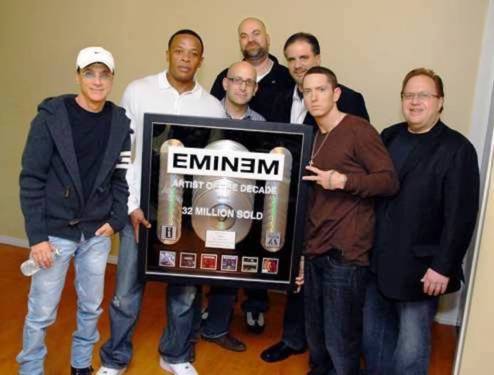 For arguments sake, even if the intention of this freestyle is to promote the album, it’s not the only reason for conducting this freestyle. Eminem clearly had something to say and genuinely believes what he is saying.

When planning something like this, you and your team have to think carefully about the sort of attention it will get. What happened after its release? It went viral. A consequence like that was both planned and expected.

Reality is, not many rappers would do what Eminem chose to do here. Sure, you’ll get numerous rappers sending out tweets about Trump and America or namedrop him in a bar here and there, but a full-blown freestyle that is a total call-out from start to finish is out the question. Credit goes to artists like YG, however, who put out the song “Fuck Donald Trump” with Nipsey Hustle. Joey Badass has also been politically-conscious in his music. We could go even as far back to the 80s with Public Enemy. It’s existed, but it’s something else when coming from a white rapper.

But this is where the real point lies. No rapper of this stature has had the balls to be this unapologetically direct. If you know your hip hop, you know what I mean by stature. This is the biggest rapper in history we’re talking about. That status isn’t a matter of opinion because the sales prove it; Eminem is the best-selling rapper ever. He’s got such a large audience that it’s simultaneously a slight risk to be so politically direct yet will gain an insane amount of attention. The social media numbers prove it, as there’s been hundreds and thousands of retweets on the BET video tweet and subsequently millions of impressions.

Question is, why was the freestyle covered this widely? Because it’s fucking Eminem. He’s a white rapper (yes, his race makes this more significant), a very big one, so if you want to influence a core of your fanbase (who happen to be white as well) it’s important to sincerely include yourself on this side of the fence as a white man who has grown up on and built a career off of black culture.

Is Eminem alienating a large majority of his fans who happen to be pro-Trump? He could be, but will all of them take this freestyle and say “Yep I’m done with Eminem. Not buying his music anymore.”? That’s most definitely not going to happen. In fact, Eminem is so important to fans that he could even change some fans’ political views. This is why it’s not a risk for him to be this politically blunt. He can be this daring and not be on the losing side from it. Money will still be made, and fans will still stay. He doesn’t have to do this, yet he did.

“And any fan of mine who’s a supporter of his
I’m drawing in the sand a line, you’re either for or against
And if you can’t decide who you like more and you’re split
On who you should stand beside, I’ll do it for you with this:
Fuck you”

He’s Done This Before …

Some may say, “Eminem’s just hopping on the 2017 protest bandwagon.” Although this isn’t new territory for Eminem. He’s made political statements in songs in the past (“White America”, 2002). Last year he dropped the 8-minute “Campaign Speech” during the presidential campaign to make his beliefs on the candidates clear:

“You say Trump don’t kiss ass like a puppet
‘Cause he runs his campaign with his own cash for the fundin’
And that’s what you wanted
A fuckin’ loose cannon who’s blunt with his hand on the button
Who doesn’t have to answer to no one—great idea!”

In early 2017, he featured on Big Sean’s “No Favors” and dropped the line “Trump’s a bitch, I’ll make his whole brand go under”. Simple, but yet again, that’s the point.

Whatever you think about the freestyle or Eminem, whether you think it’s corny, that he’s washed up, that he’s white or simply whether you don’t want to hear a rapper you’re not interested in say something important, consider the fact that it’s needed. The level of attention and coverage it’s received bears the fruits of its labour.

At the same time, let’s not get carried away. Eminem isn’t doing anything incredibly new here. He’s just reiterating a message and using his platform so that it reaches more people, an audience that he believes needs to hear this message.

What’s the next step for Em then? It’ll be interested to see if this sort of content carries on to his forthcoming album or whether this was a one-time statement. Either way, the world is paying attention.