2 Chainz is underrated. You might find that hard to believe, but when you look at the current crop of hip hop acts that have emerged in recent years and are continuously praised for being different, 2 Chainz is never in the mix of that conversation. So why is that?

Truth be told, 2 Chainz was ahead of his time. Over the past few years, trap rap has taken over the American hip hop scene and even made its way into pop music. Artists like Lil Yachty and Lil Uzi Vert have become the poster boys for this new wave of rap music. Though while they receive all the credit, it’s people like 2 Chainz who paved the way for them to be successful.

Lil Yachty is the perfect example of what 2 Chainz pioneered. He’s not doing anything particular “new” which people say he is doing, because 2 Chainz did it before him. This makes 2 Chainz the original Lil Yachty.

A little history lesson to add some context to this statement: 2 Chainz underwent a major rebranding in 2012. He originally called himself Tity Boi, but he changed his name to 2 Chainz. Way better. Straight away he began to churn out hits like “No Lie” and “Birthday Song”, all of which had something highly in common; bad, but humorous lyrics, over trap beats.

2 Chainz instantly became notorious for being a very bad rapper… but he was making hits that everyone was listening to. This is the man that said “She got a big booty so I call her big booty”. This is the man that said he drinks breast milk out of a lean cup. He put a fat rabbit on a craftmatic, whatever that means. He was a true expert at coming up with the most awful lyrics, but making them funny, which constituted for the poor lyricism because you could tell it was on purpose. That’s the intention of the bad bars – they’re so bad that they’re funny.

Fast forward five years, and Lil Uzi is saying “Diamonds on my teeth / Your shit look like foil”, and Lil Yachty is saying “She blow that dick like a cello”. And really, that was why 2 Chainz was ahead of his time. The level of backlash he received for his bad lyrics was enormous. But now it’s acceptable to have bad bars, because it’s become popular. Critics shunned 2 Chainz in 2012 for his quality of lyricism, but it’s acceptable from Yachty in 2017 because’s “he’s different” and “being himself”.

But bad, funny lyrics isn’t the only component of 2 Chainz’s brand – the same sort of brand that fans and critics say Lil Yachty has created. The charisma in his songs transcends into his real life personality. He comes across dumb in his songs, but he’s not really.

Lil Yachty also possesses a similar charisma that 2 Chainz embodies. He spreads positivity and kindness and always comes across as a happy person. Along with that comes his intellectual fuck-ups like when he tried to explain his ‘cello’ bar. It’s this personality that has enabled him to become popular across social media.

Personality aside, what else is a part of Lil Yachty’s brand? There’s his signature red braids, his boat motif in his music which has led to him being sponsored by Nautica, he’s been in ads for Sprite and Target and tweets about him constantly go viral. He’s become a recognisable person within the social world as a result of this brand.

Besides the lyrics and charisma, there is also more to 2 Chainz’s brand. He owns his own record label (The Real University), portrays himself as a trapping kingpin, makes television and news appearances, invested in real estate, and appeared in a 7UP ad, all while making $2 million off ‘Dabbin Santa’ Christmas sweaters as a side hustle. 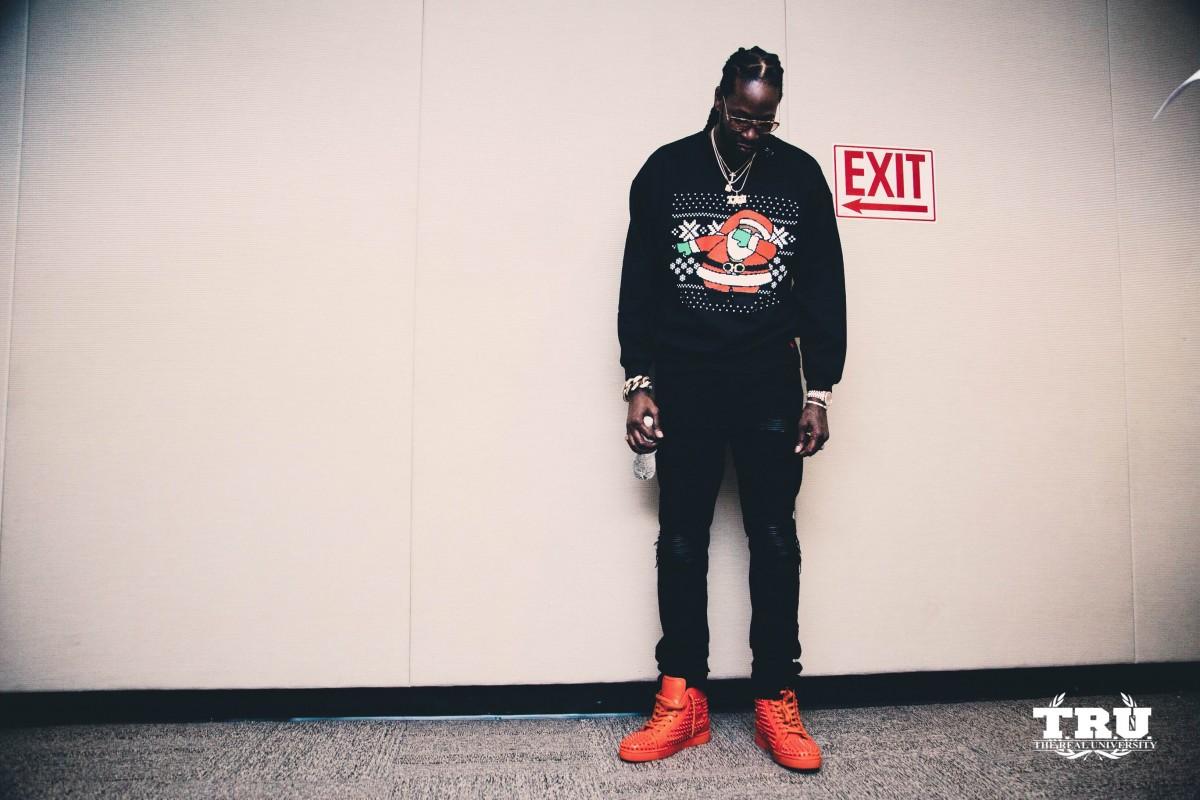 When you think about trapping, you think about 2 Chainz. That doesn’t take anything away from his musical trademarks, such as saying “Twooo chainzz” at the start of every verse, while Lil Yachty exclaims “LilBoat” as his own trademark.

So just like Lil Yachty, 2 Chainz created an image outside of music that’s contributed to making him a recognisable figure. Just not with the young generation:

The only major difference between 2 Chainz and Lil Yachty is that Yachty is significantly younger, which works in his favour. Yachty is only 19, while Chainz is bordering 40. The young new generation are therefore going to look towards the rappers that are of their own age; people that relate to themselves. It’s part of Yachty’s brand to present himself as “King of the Teens”. He even called his album “Teenage Emotions”. And in the age of the internet if you want the sort of viral recognition that Yachty receives that is totally unrelated to his music, you got to be accepted by that audience and simultaneously be a part of it.

The fact that Yachty’s brand has become bigger than his music will be very problematic in the years to come. After heavy promotion, his album Teenage Emotions only sold 46k in its first week. This is where the era in which 2 Chainz emerged isn’t a totally negative thing, it’s also benefitted him. 2 Chainz managed to avoid the streaming wave that hit the world in around 2015. Back in 2012, people were still downloading songs off iTunes. That’s why his debut album sold 100k more than Yachty in the first week, followed up by 63k (2013) and 53k (2016). See how the sales have decreased? Chainz subsequently secured multiple top 40 hits and a number 1 album, two things which Yachty hasn’t been able to do.

Put that in order and 2 Chainz was able to build musical success, then a brand. Yachty’s brand came hand-in-hand with his music. The result is a young, more recognisable and relevant Yachty without commercial success, against the old, overlooked but commercially successful 2 Chainz.

Thus if 2 Chainz emerged as a new, young rapper in 2016, he would totally be in the same bracket as Lil Yachty is now. But whether he’d be as commercially successful as he ended up being in 2012 is another question.

So with Pretty Girls Like Trap Music – 2 Chainz’s fourth album – just coming out, it’s about time he is recognised as one of the forefathers of the new age of young, lyrically-deprived rappers. It’s a style and a brand that he manufactured, not Lil Yachty. If we’re going to celebrate Yachty’s personality, humour, quirkiness and brand, then we must do the same for 2 Chainz, even if the new young generation of rap fans aren’t aware of it.